Jamal’s Journey from Guyana to Morehouse College and Angel Investing

Jamal Trotman doesn’t have to tell you he’s from Brooklyn for you to figure it out quickly. Standing 6 feet tall, the 25-year-old exhibits confidence, swag, and a great deal of passion that screams BROOKLYNITE through and through. The twists and turns of life can be unpredictable; one’s journey can constantly shift along the way. This is the case for Trotman, a member of the second graduating class of the Eagle Academy for Young Men of Ocean Hill (‘16) and Morehouse College (‘20). Trotman’s life journey led him from his origins in Guyana to overseeing his family’s financial company, with ambitious plans to dedicate the next 30 years of his life to investing, teaching, and distributing wealth to the next generation of inner-city youth.

For Trotman, immigrating to America from Georgetown, Guyana, was not easy, primarily due to navigating the streets of Brooklyn while attending a competitive elementary school.

“There was a language barrier, and there were jokes that I won’t tell you about on camera that lasted from 2nd to 5th grade,” Trotman said. “I was new to the country, I had an accent, and it was tough to make friends. On the first day of school, I came with some Reebok’s, and [my classmates] let me know, ‘this isn’t how we do things around here.'”

Trotman would quickly learn to adjust and excel socially and academically. As Trotman was nearing the end of elementary school, he recounted a memorable and life-changing moment in his school’s cafeteria, where he would first learn about Eagle Academy. In a moment where he interacted with students who were already students at Eagle Academy, Trotman was intrigued by several aspects of the presentation and, at that moment, thought about how Eagle Academy could potentially benefit him. The “Eagle Pledge” is what stood out and resonated with Trotman on a deep level.

While Trotman had plenty of options for his middle and high school journey on the public and private side of the spectrum, he was moved by the presentation the Eagle scholars delivered. What he witnessed at that moment led Trotman to attend The Eagle Academy for Young Men of Ocean Hill.

“I remember it like it was yesterday. All the elementary school boys in 5th grade came down to the lunchroom, and Eagle [Academy] students were there. Some of [my fellow 5th grade football teammates] – Peter Myles and Charles Hilton, to name a couple, were there. I was excited about video games and football, but the number one thing that sold me was the pledge. It showed me they had some discipline and culture, and I knew I needed that to get to where I wanted to go next. “ 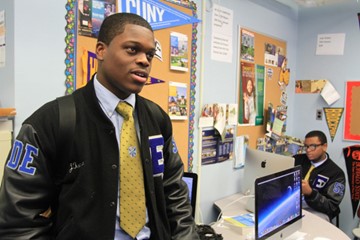 Attending the Eagle Academy for Young Men of Ocean Hill was an important move for Trotman and one that saw him step out of his comfort zone. Only a few students from his elementary school decided to attend, which meant Trotman would be entering an unfamiliar environment and must meet new friends along the way.

Trotman still remembers his first day of school and the bus ride on the B7, where the brotherhood was on display.

“Everything was so fresh and so new. You see guys who are about to be with you for the next [seven] years through twelfth grade. I will never forget that experience.”

“The Blackstone Group taught me the highest level of finance…[and] professional development programs like the one offered through NBCUniversal are second to none. Because of Eagle Academy, when I landed on Morehouse’s campus, I was already recruiting seniors for a Fortune 500 company and job opportunities as a freshman.”

Trotman has found success in every step, but success sometimes comes with hurdles and unprecedented obstacles. After studying tirelessly for three years for the SATs, Trotman would receive the highest mark in the school’s history. Then, at 18, the youngster would hit a challenging moment as his scores had improved by such a. Big margin, that he was accused of cheating. On top of this, his promising football career would reach a screeching jolt due to several serious injuries. This was one of the most disquieting moments in his life, but he would clear his name of any SAT scandals and land at one of the nation’s premier historically Black colleges and universities.

Trotman’s knowledge and perseverance would serve him well at Morehouse College. After attending Eagle Academy from the 6th grade, Trotman was not necessarily looking to attend another all-boys school for another four years, but meeting with alumni from around the country changed his decision.

“What sold me were the alumni. I want to have a lasting impact on my community. I met guys like Dr. Robert Gore doing impactful things in the community. I thought, ‘Wow, I want to be like that guy.’”

Trotman is apart of a growing Eagle’s Nest at Morehouse College where there are over a dozen Eagle Academy alums who have attended the HBCU. They have a shared brotherhood that includes daily text messaging, sharing opportunities, productive meetups, and overall fellowship.

Since graduating from Morehouse in 2020, Trotman has hit the ground running, working for his family’s financial company and angel investing. He is also raising funds for a $40 million fund aimed at influencing the next generation of business owners from HBCUs and marginalized groups such as women and people with disabilities. Trotman is adamant about investing in their ideas.

Amongst his lofty goals, Trotman wishes to return to Eagle Academy to teach his younger brother’s wealth literacy, the future of wealth creation, and how to make a generational difference for their families. Trotman’s goal to serve his younger brothers through financial education fits in line with EAF’s revamped vision under the ESB program which deepens our focus on College Readiness, Workforce Readiness, Social-Emotional Learning, Financial Literacy, and Institutional Preparedness. This work is personal to him and something he aims to dedicate his time and energy towards.

“It’s all about giving back,” Trotman said. “Anything I can do to help my younger brothers, I allow Eagle to use me in that way. I [want] to help create more Jamal Trotman’s so more kids can dream”