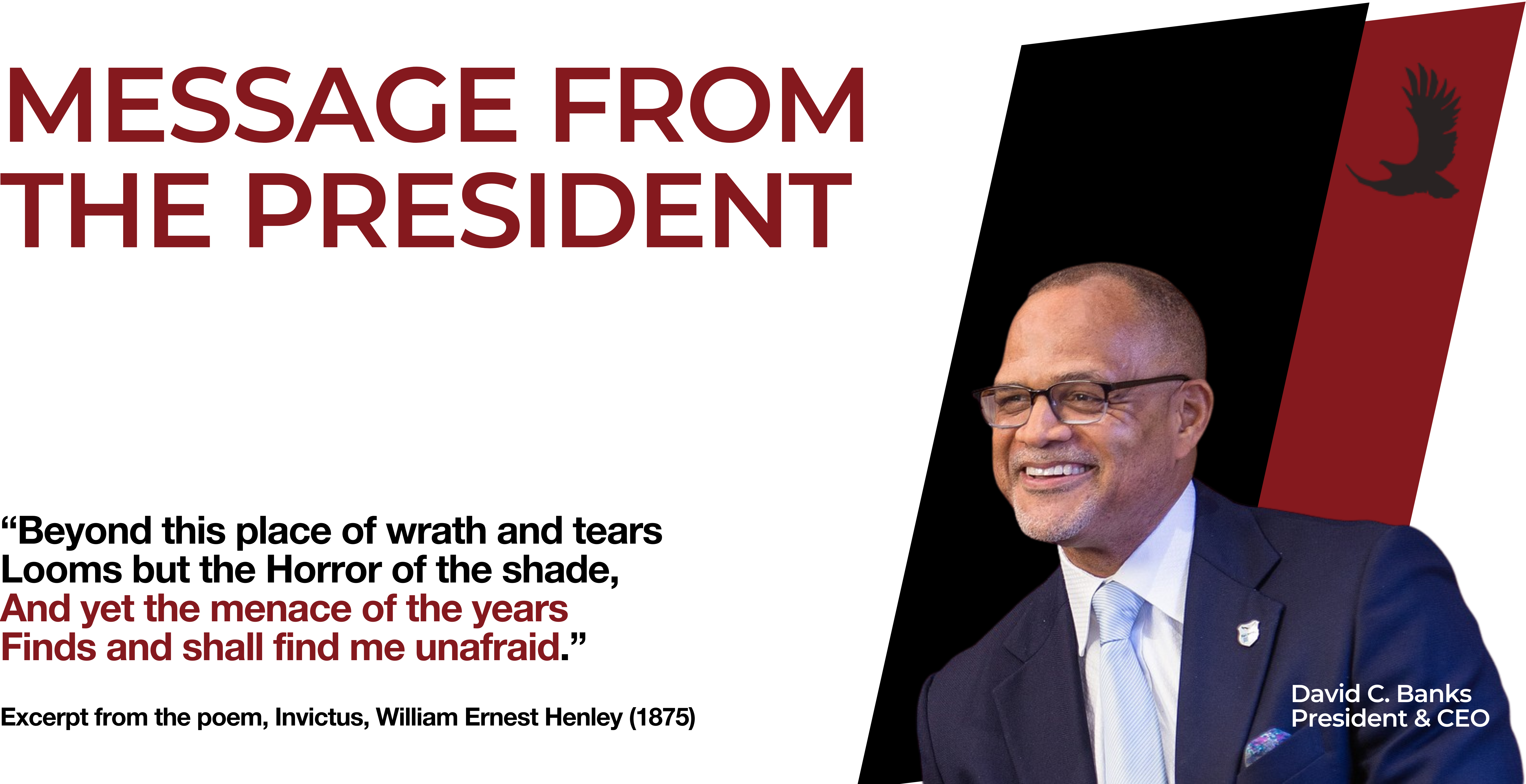 The past year has been frequently described as extraordinary and unprecedented, referencing unforeseen struggle and despair on a global scale. The COVID-19 pandemic, and now in its wake the challenges of vaccine rollout and a continued litany of adversities, will not soon be forgotten largely because of the extent of death, suffering, and widespread lifestyle adjustments that the entire world’s population has had to make.

Yet while COVID-19 and its effects are phenomena which overwhelmingly challenge safeguards to our individual and public health, an even older, enduring, and insidious pandemic has plagued this country since before its founding – systemic racism. Those whose ancestors were enslaved, oppressed, and marginalized in this country have been dealing with the scourge of White supremacy and the brutality it propagates in various iterations with each successive generation. The Eagle Academy Foundation (EAF) was created in response to this particular pandemic and specifically its manifestation in the lives of young men of color. The 2003 Columbia University study which ascertained that nearly 75% of inmates in the New York State prison system came from just seven neighborhoods in New York City, gave credence to the horror of disproportionate mass incarceration of young Black and Latino men, the majority of whom had to navigate the difficulties of growing up and living in disadvantaged and undeserved communities. Many in our society are now awakening to the fact that such men of color have been unfairly targeted because of discriminatory overcriminalization and failed policies such as the war on drugs and mandatory minimum sentencing.

Refusing to ignore these realities, Eagle’s founders, the One Hundred Black Men of New York, decided to disrupt this fateful paradigm, noting that traditional public schools were failing to adequately educate young men of color, unfairly suspended them at high rates, and effectively led them into the clutches of the prison system to continue cycles of incarceration and poverty. EAF decided to create schools that would provide the culturally relevant, historically sensitive, and tactile education that young men of color need to thrive and succeed. The mission of EAF has therefore been to develop and support its network of six all-male, grades 6 through 12, college-preparatory schools in challenged, urban communities. We educate and mentor young men into future leaders committed to excellence in character, scholastic achievement, and community service; and we promote these principles nationally.

With a model of education that intentionally acknowledges the lived history of people of color, and equips our students with tools to thrive, survive, and overcome the obstacles of their circumstances, the Eagle network of schools focuses on educating, empowering, and uplifting young men of color. Since the founding of the first Eagle Academy for Young Men in the Bronx in 2004, scores of Eagle scholars have drawn daily inspiration and tenacity from the recitation of the poem Invictus by William Ernest Henley, an excerpt from which appears above. They learn how Henley, beset by a number of ailments including the traumatic amputation of one foot and enduring multiple painful surgeries on the other, created the poem while in his sick bed in the mid 1800’s, racked by constant pain, discomfort, and facing an uncertain future. Eagle students recite the poem as an acknowledgement of the multiple adversities they face as a collective, but they draw inspiration, grit, and determination to arrive at the conclusion that was reached in the unofficial Black national anthem and hymn by James Weldon Johnson – “we shall overcome”.

The final lines of Henley’s poem are “I am the master of my fate, I am the captain of my soul,” reminding our young Eagles that regardless of hardship, they have the personal agency to overcome difficulties and drive success in their lives. At Eagle, we reinforce this credo of resilience, especially amidst the struggles of the past year which has tested so many of us.

As we look ahead, acknowledging all that we’ve overcome, we celebrate the great feats and milestones that our scholars and alumni continue to achieve. We are also looking forward to continuing our leadership in the education of young men of color and promoting Eagle values and promising practices nationwide to the benefit of all young scholars. To get a glimpse of who we are, I invite you to:

» Watch the trailer for The Infamous Future, a documentary film about the Eagle Academies that you can now stream on HBO Max

It is truly a pleasure and an honor to lead such an organization that invests so much in our young men of color. I look forward to keeping all of our supporters and site visitors updated on our progress.